Baseball and Fishing. Two of life's noteworthy passtimes. Two of our country's most loved sports.

Meet David Buchek. A man who has an extreme passion and talent for both.

After signing with the St. Louis Cardinals as a minor league infielder, David later went on to become the Strength & Conditioning Coach and head bullpen coach for the Springfield Cardinals. Soon after, David worked 10+ years as a baseball instructor and personal trainer to women, men & children of all ages- helping people reach their goals, enriching the lives of others.

During his career in baseball and training, David soon realized that he had been neglecting his true passion in life- FiSHiNG.

Ever since he could remember, David has enjoyed fishing Table Rock Lake with his father. Throughout the years, David has perfected fishing techniques and has come to realize that fish life is the only life. David recently obtained his Captain's license- allowing David to turn his life's passion into a career. With hopes to instill the love of fishing in others young & old & to educate people on the sport, David currently hosts guide trips on Table Rock Lake, Lake Taneycomo and Bull Shoals Lake. 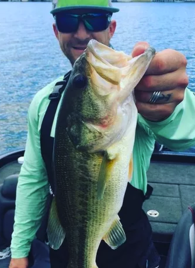